Part 1: Winter Storm Gail Live Updates. Scroll down for information on the cold snaps / polar vortex shots due next week.

Interstate 80 Westbound in Clinton County is currently closed due to a major pile up which involved an estimated 30-60 cars. There are multiple reported injuries as well as sadly, 2 fatalities.

Reminder-Please Stay Home and Do Not travel unless it is absolutely necessary. https://t.co/0TkfYAbTxT

Winter storm Gail continues to produce moderate to heavy snowfall across the North East U.S., with a mix precipitation type being reported in more coastal regions. Further north west, 13″ has already been recorded in State College, PA, with 5-6″ reported in NYC. The image from northern PA was posted to twitter just now. It is possible that some parts of PA could reach 30 inches, that’s 2.3ft of snowfall.

However, it’s not just Winter Storm Gail that’s concerning weather forecasters at this point. The potential for further frigid shots into Christmas is looking increasingly likely.

The term “Polar Vortex” is used to describe the usually tightly packed core of very cold temperatures over the north pole during Winter. Sometimes, sections of the polar vortex can break off, and fall south, into mid Latitude areas. When this happens, places like the U.S. and Europe can experience very much colder than average conditions. Not all polar outbreaks will be severe, but all will be cold.

Take a look at this following chart, showing temperature anomalies for next Friday (25th December, Christmas day). Notice the blues across the central and eastern half of the country, indicating a very cold pattern. (Source of image: pivotalweather.com)

A number of computer models are suggesting that these colder than average temperatures could become fairly persistent, lasting throughout next week. It’s possible that some moisture interactions from the Pacific or Atlantic jet could engage with the expected cold air to produce snow events or even snow storms next week, so be aware of that risk

Before next week, though, some pretty wintry conditions are expected this weekend. A winter storm is expected to produce some severe weather, including ice, snow, and strong winds.

This following snowfall accumulation chart from Pivotalweather.com shows the wide mass of snow possible by next weekend, bear in mind these are just an early indication and to be taken with a pinch of salt at this stage. 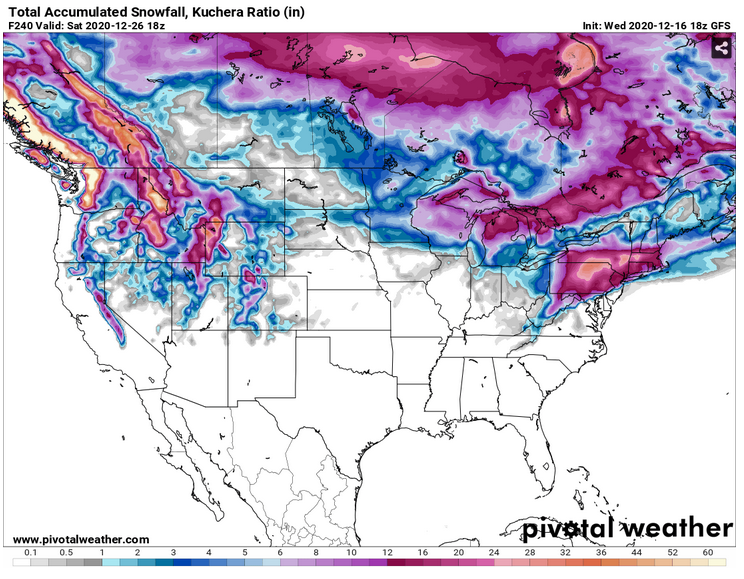 So, after a lousy start, winter is finally set to get going across the North East of the U.S. Some very cold conditions, much colder than average, are likely next week for the North East. These anomalously cold temperatures may become quite prolonged, as in the past such patterns can become quite “fixed”, and hard to shift. As ever though, there’s some uncertainty involved here. Keep an eye on updates in the future and warnings issued by NOAA or local authorities.